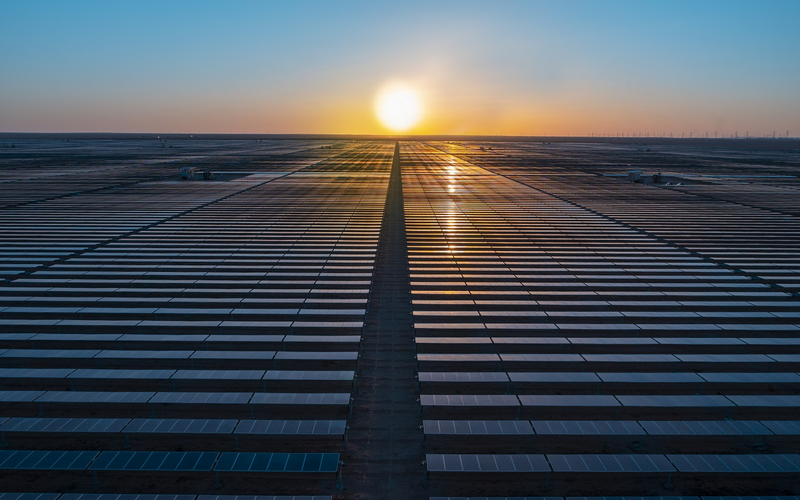 The launch of the Sudair Solar project was announced at the inauguration of Sakaka PV project in April 2021, under the patronage of HRH Prince Mohammed bin Salman bin Abdulaziz, Crown Prince, Deputy Prime Minister, Chairman of the Supreme Committee for Energy Mix Affairs for Electricity Production and Enabling Renewable Energy Sector, and in the presence of HRH Prince Abdulaziz bin Salman bin Abdulaziz Al Saud, Minister of Energy.

A specialized Saudi technical team at the Ministry of Energy selected the Sudair project site and carried out the engineering requirements and preliminary studies of the project with the aim of achieving the highest levels of efficient energy production and contributing to shaping the circular carbon economy, which the Kingdom adopted during its presidency of the G20 last year. Sudair solar is testament to the Kingdom's continuous efforts to reduce emissions resulted by the energy sector. Additionally, the Ministry of Energy utilises its Renewable Energy Program and Local Content Development Program to enable the prosperity of this promising sector and its supply chains through various initiatives such as mobilizing private sector investments and encouraging partnerships between the public and private sectors to create a competitive national market for renewable energy.

ACWA Power also announced that SAPCO, a fully owned company of Aramco, have joined the consortium with ACWA Power and Badeel, a company fully owned by PIF. The consortium, led by ACWA Power, embodies the strategic importance of the Sudair Solar PV project, the first project under PIF’s renewable energy program. The program aims to support Saudi Arabia’s ongoing energy transition and diversification, and to deliver 70% of the country’s renewable energy under the National Renewable Energy Program (NREP).

ACWA Power - in which PIF holds a 50% stake - and Badeel will each own 35% in the special purpose vehicle “Sudair One Renewable Energy Company”, which was incorporated for the project; with SAPCO holding a 30% stake.

Renewables and Utilities sector is one of the 13 priority sectors that PIF identified as a key focus area in its Strategy 2021-2025. The strategy focuses on unlocking the capabilities of the private sector, and aims to increase local content contribution to 60% Including PIF and its portfolio companies, in addition to expanding opportunities for local companies to partake in the Fund's projects.

Aramco’s investment in the Sudair Project is its first participation with PIF in its renewable energy program; reflecting the company’s efforts to advancing sustainable energy solutions within its operations and Saudi Arabia, where a variety of low-carbon energy solutions are being deployed.

With an investment value of SAR 3.4 billion, Sudair Solar PV project, which is located at Sudair Industrial City, is set to become one of the largest single-contracted Solar PV plants in the world and the largest of its kind in Saudi Arabia. A 25-year power purchase agreement for the plant was signed with the Saudi Power Procurement Company, with the tariff being among the lowest for solar PV projects globally. Using bi-facial modules with tracking technology, the plant is set to deliver highly efficient performance and be capable of powering 185,000 homes, while offsetting nearly 2.9 million tons of emissions per year.

The financing for the project is based on the principles of limited recourse project financing, with the senior debt structured as a soft mini perm facility with a tenor of 28 years and both conventional as well as Islamic tranches. The financing structure also features a set of equity bridge facilities provided by local and international banks supporting the sponsor group’s equity investment in the project.

Underpinned by our ambition and determination to continue driving the transformation of the Kingdom’s energy sector, I would like to extend my sincere gratitude and pride following the signing of agreements for the first project under the PIF Renewable Energy Program. Today’s milestone marks progress in achieving the goals of Vision 2030 and the requirements of the National Renewable Energy Program launched by the Custodian of the Two Holy Mosques, King Salman bin Abdulaziz Al Saud; guided by the directives of His Royal Highness the Crown Prince, Mohammed bin Salman bin Abdulaziz; and reinforced by the unparalleled support of His Royal Highness Prince Abdulaziz bin Salman, Minister of Energy, to accomplish this ambitious vision

Abunayyan continued, “The launch of Sudair Solar embodies a pivotal foundation for diversifying the energy mix and accelerating energy transition in the Kingdom, as well as transferring ACWA Power’s international expertise, knowledge and capabilities in the global renewable sector back to the Kingdom. The project will encourage Saudi companies to participate in the implementation of renewable energy projects and support local talent in cultivating the skills and competencies needed in this thriving sector, which constitutes one of the Kingdom’s key pillars for sustainable socioeconomic development."

“The Sudair Solar project is also testament to the leadership and foresight shown by PIF in bringing together various stakeholders to create tangible impact in the renewables sector by integrating robust public-private partnerships (PPP), one of the cornerstone policies of Vision 2030. We are honoured to work hand-in-hand with the Kingdom's greatest national champions, including PIF, Aramco and leading local and international financial institutions; to bring the largest solar PV plant in Saudi Arabia to fruition,” Abunayyan added.

This milestone demonstrates the potential for solar power in Saudi Arabia and the expertise that this consortium has to deliver it. The landmark renewable energy project is a significant step and key part of PIF’s commitment to develop 70% of Saudi Arabia’s renewable energy capacity outlined in the Saudi Vision 2030. It also helps fulfill the aims of the Saudi Green Initiative to chart a path for Saudi Arabia and the broader region to protect the planet by clearly defining an ambitious roadmap that rallies the region and will significantly contribute to achieving global targets in confronting climate change

Our involvement in the Sudair Solar PV plant reflects our efforts to advancing sustainable energy solutions, both within our own operations and the broader energy network. While hydrocarbons will continue to be a vital part of the energy mix for decades to come, renewables like solar have an important role to play in helping achieve the world’s climate goals. Sudair will support Saudi Arabia’s ambition to generate part of the nation’s power needs from renewable energy by 2030, and is one of several low-carbon energy options being deployed by Aramco

The EPC agreement for the construction of the Sudair Solar PV was signed with Larsen & Toubro in April 2021. The first phase of the project is expected to begin producing electricity during the second half of 2022, contributing towards the Saudi Green Initiative.