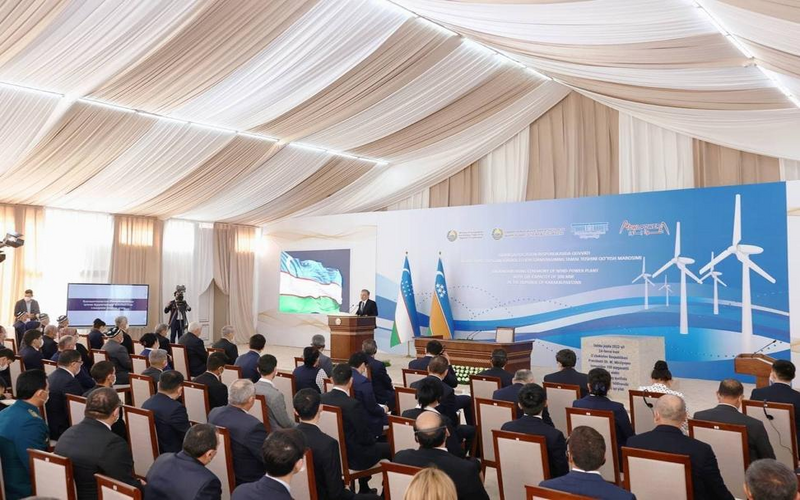 The ground-breaking comes less than two months after binding project agreements were signed with the government of the Republic of Uzbekistan and JSC National Electric Grid (NEGU), the off taker. With an estimated total investment of US$108 million, the project is in the Karatau district, Karakalpakstan region, in the North-western part of the country. It is expected to reach financial close by Q3 2022.

The Uzbek government has plans to diversify the country’s energy mix and is targeting 8 GW of solar and wind capacity by 2026. The Nukus wind project marks the republic’s first open, competitive tender in the wind energy sector. ACWA Power won the bid after proposing a tariff of US 2.5695 cents/kwh, which was the lowest in a tender process that included 11 other bidders.

Uzbekistan has been working closely with the IFIs to open up the country’s power sector to private investment and to help us reach our goal of 25% of energy consumption deriving from renewable sources by 2026. We have a huge variety of projects underway, and already completed. It is my great pleasure to update audiences on our progress. Uzbekistan is committed to policy goals to improve energy efficiency and increase renewable energy’s share of the country’s energy mix

Laying the cornerstone of the Nukus plant comes shortly after the signing of the official purchase agreements is as an affirmation to supporting the ambitious vision of the leadership of the Republic of Uzbekistan to enhance the potential of the Uzbek energy sector. At ACWA Power, we are honoured to add this pioneering project to our portfolio, especially for its precedence and leadership in more than one aspect in the energy sector of the Republic of Uzbekistan. On this occasion, I can only express my gratitude to the government of the Republic of Uzbekistan, our partners in the private sector and the Uzbeks for their support in achieving this important achievement. As we look together towards the future, we assert our commitment to implementing this project in accordance with the highest standards of quality, safety and security, and achieving the desired positive impact on the economy and society

The project will comprise of Wind Turbine Generators (WTG) using advanced design and technical features. Each WTG will have a capacity of generating more than 5 MW of electricity, which demonstrates ACWA Power’s ability to keep optimising design together with manufacturers for continuous innovation. Furthermore, ACWA Power will also endeavour to give local advisory, manufacturing, and manpower firms an opportunity to participate in the project.

The Nukus wind project is ACWA Power’s fourth facility in the Republic of Uzbekistan. The company’s in-country portfolio also includes a combined cycle gas turbine plant, and two wind projects. When this project achieves commercial operation in 2024, it will contribute 1.25% to Uzbekistan’s overall renewable energy goals. Additionally, the facility is expected to power 120,000 Uzbek households and offset 200,000 tonnes of carbon emissions per year.