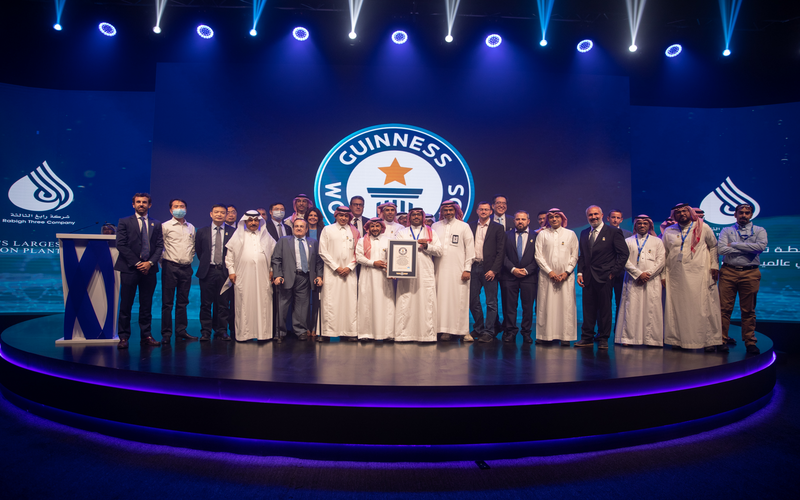 Located in Saudi Arabia, the project was feted in a ceremony which included senior officials from the Ministry, government officials from the Rabigh governorate and executives from the Saudi Brothers Commercial Company and Saudi Water Partnerships Company.

Rabigh 3 meets the clean water needs of one million housing units in Makkah and Jeddah, and ensures a sustainable and reliable supply of water for citizens and residents of these growing cities and its neighbouring villages. This will ensure the water security of many residents, along with pilgrims that this region welcomes during the holy month of Ramadan and the Hajj season. This project is remarkable because it is the largest of its kind using reverse osmosis technology in the world, with a production capacity of 600,000 cubic metres of desalinated water per day, setting a global record in the Guinness World Records™ for its unprecedented capacity. It also brings in investment to the region as the project cost is at SAR 2.6 billion (US$750 million)

Developed with Saudi Brothers Commercial Company (SBCC), Rabigh 3 IWP project is the first desalination plant of its size in the private sector. The project has deployed a 100% Saudi workforce and will continue to create new employment opportunities for local talent. Furthermore, the project will continue to contribute towards enhancing local content capabilities by utilising local manufacturing to meet relevant needs.

We extend our sincere gratitude to His Excellency the Minister for his patronage and support of the global achievement of Rabigh 3. This milestone is a result of the strategic goals of Saudi Arabia’s Vision 2030, which outlines the advancement of the water desalination sector in the Kingdom. This project would not have been possible without the government’s support, and the consolidation of partnerships between the public and private sectors, enabling collaborators to achieve pioneering projects in terms of size, cost, efficiency in operation and preservation of the environment. These are projects that have made the whole world watch developments within this country

Rabigh 3 IWP is unique compared to other independent water projects in Saudi Arabia. It is the first IWP after the second round of public private partnership when the SWPC became the principal buyer of water.  It is the biggest seawater reverse osmosis plant in the region and first time we put an energy cap of 3.5 kilowatt per hour, which reduces the energy consumption and in turn reduces the entire desalination sectors average tariff by 30-40%, resulting in a reduced overall carbon emission. We have also mandated a local content contribution of 40% for construction and 70% local content for operations. We believe Rabigh 3 IWP is the milestone of change in the desalination sector, and all have followed this outstanding example of innovation

On behalf of the International Desalination Association it’s an honour to attend the opening ceremony of Rabigh 3 IWP, the world’s largest SWRO desalination plant confirmed by the Guinness World Records™. This impressive and flagship project offering a reduced tariff and reduced carbon and environmental footprint sets a new benchmark for the industry. Under the vision of KSA 2030, H.E. Minister Al Fadley, Minister of the Environment, Water, and Agriculture, Eng. Al Qureshi, CEO of SWPC, and Mr. Mohammad Abunayyan, ACWA Power Chairman have solidified the Kingdom’s continued leadership position in large-scale desalination which compliments the forecasted economic development as per Vision 2030. This project also mandates a local content contribution of 40% for construction and 100% Saudization for operations. The Kingdom of Saudi Arabia since 1971 has been the living laboratory of large-scale desalination and keeps shining brightly with innovation in energy strategies and reduction of water production costs. Rabigh 3 IWP is an outstanding example, and we are excited to see the future projects and achievements coming next