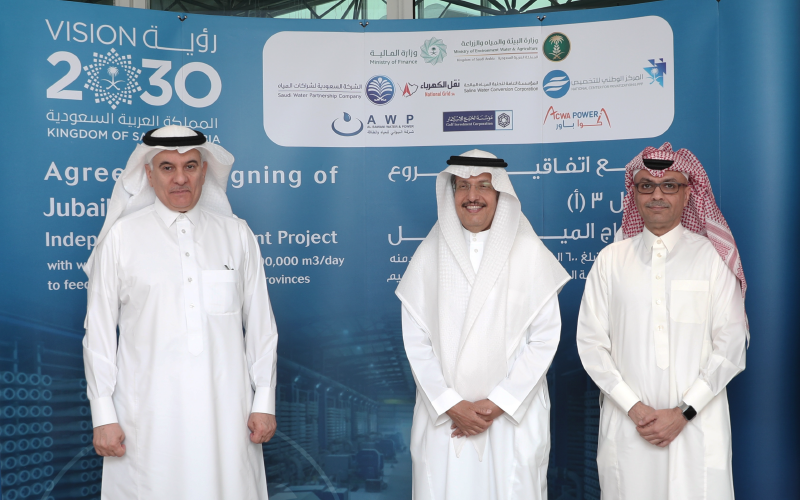 Riyadh, Kingdom of Saudi Arabia, 30 April 2020: A consortium led by ACWA Power including Gulf Investment Corporation (GIC) and AlBawani Water & Power Company (Albawani) announced today the signing of a water purchase agreement with the Saudi Water Partnership Company (SWPC) for a greenfield sea water reverse osmosis desalination project in Jubail, KSA. The Jubail 3A Independent Water Plant (IWP) will have an investment value of USD $650 million and a capacity of 600,000 m3 of potable water/day, greatly contributing to Saudi efforts to ensure water security.

The 25-year agreement was signed with His Excellency Abdulrahman Abdulmohsen A. AlFadley, Minister of Environment, Water and Agriculture and Chairman of the Board Directors of SWPC. Under the terms of the partnership, the consortium led by ACWA Power will design, construct, commission, operate and maintain the desalination plant as well as associated potable water storage and electrical special facilities.

In alignment with our mission to ensure adequate water production capacity for the Kingdom of Saudi Arabia, we are keen to work closely with ACWA Power, a Saudi company with international expertise, as our trusted partner

“The Jubail 3A is a highly significant project for the KSA water sector, featuring storage facilities as well as in-house solar power to reduce any burden on the energy grid. It will also be crucial in meeting growing water demand, supplying Riyadh, Qassim and the Eastern Provinces with much needed potable water,” he continued.

Building sustainable water security is a key priority for the Kingdom. ACWA Power is well positioned to ensure long term availability and supply of reliable, low-cost water resources needed to advance socio-economic progress. We continue to contribute strongly to the Kingdom’s National Water Strategy 2030 and Vision 2030 by utilising our considerable global expertise to provide solutions that best support national interests. We are delighted to collaborate with SWPC on this major project and are confident that the Jubail 3A IWP will play a significant role in enhancing critical water infrastructure for the country

Desalinated water makes up 63 percent of water consumed in Saudi Arabia. ACWA Power is a leading industry player in the KSA water sector and has been entrusted with several major desalination projects in the country including the Rabigh IWP, Shuqaiq IWPP and the Shuaibah plants.

We are extremely proud to have been selected by SWPC to deliver Jubail 3A IWP. We bring recognized sector expertise and a well demonstrated track record in successfully operating key projects under the KSA public-private partnership framework. Jubail 3A IWP is an important addition to our rapidly expanding portfolio of projects and is an endorsement of our capacity and capability to deliver sustainable results, benefitting the communities we serve

The Kingdom of Saudi Arabia has successfully attracted local, regional and international private sector investment into the country’s water and power sector. This project will continue to increase the efficiency of the sector with private developers using up to date technology and good utility practice at a very economical price," Mr Al-Judaimi further added: “Winning Jubail 3A project reinforces GIC role in supporting private sector participation in the development of the GCC economies

The project will be delivered by ACWA Power, Gulf Investment Corporation and Al Bawani Water and Power Company. The Engineering Procurement Construction contract has been awarded to a consortium consisting of Power China, SEPCO-III and Abengoa.