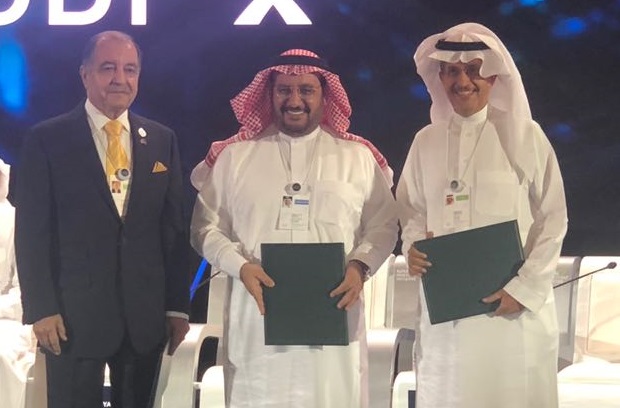 ACWA Power, Saudi Aramco, and Air Products today signed an agreement to form an over $8 billion Gasification/Power joint venture (JV) located at Jazan Economic City (JEC) in Saudi Arabia. The signing ceremony was held on the first day of the Future Investment Initiative 2018 in Riyadh. FII 2018 takes place from 23rd- 25Th October, 2018 in Saudi Arabia, under the auspices of His Royal Highness Prince Mohammed bin Salman bin Abdulaziz, Crown Prince, Vice President of the Council of Ministers and Minister of Defense, FII serves as a platform to shape the future of global investments.

The JV will purchase the gasification assets, power block and the associated utilities from Saudi Aramco for approximately over $8 billion. These assets are currently under construction and will be transferred to the JV upon successful start-up, currently scheduled in 2019.

The JV will own and operate the facility under a 25-year contract for a fixed monthly fee. Saudi Aramco will supply feedstock to the JV, and the JV will produce power, hydrogen and other utilities for Saudi Aramco. Air Products will own at least 55 percent of the JV, with Saudi Aramco and ACWA Power owning the balance. the importance and recognition that critical infrastructure assets in the region are being developed and operated under the Public Private Partnership (PPP) model.

The consortium will increase job opportunities and transfer the most advanced technologies in this field to the Kingdom, and enable Saudi talent to employ this technology for the first time.

The JV will serve Saudi Aramco’s Jazan Refinery and terminal at JEC, a megaproject that will process heavy and medium crude oil to create liquefied petroleum gas, sulfur, asphalt, benzene and paraxylene, and add 400,000 barrels per day of refining capacity.

Ghasemi noted that the JV furthers the efforts of the Public Private Partnership (PPP) model to develop critical infrastructure assets in the region, a key component of the Kingdom’s Saudi Vision 2030.