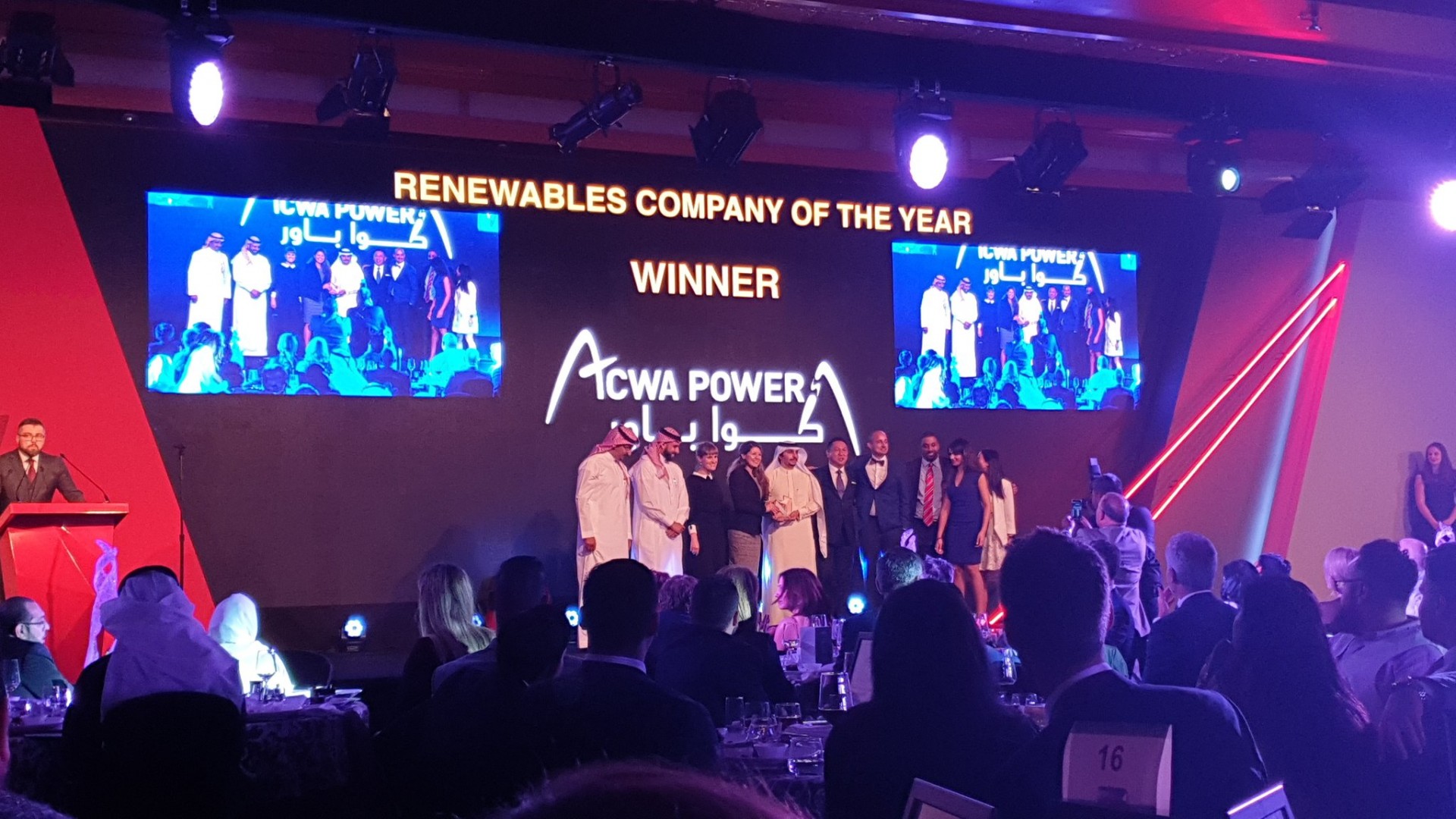 ACWA Power, a leading developer, owner and operator of power generation and water desalination plants, won the Renewables Company of the Year award at the MEED Awards 2018 for the second consecutive year, reinforcing its position as an influential sustainability enabler in the Gulf.

As a leader in the region’s energy landscape, ACWA Power has demonstrated tremendous stewardship to influence sustainable impact within the industry by collaborating with our partners and stakeholders. The MEED Renewables Company of the Year 2018 award is recognition of our achievements in environmental sustainability, worker welfare and innovation, as well as business. By winning the award for a second consecutive year, we are reiterating our commitment to our objectives that complement the Gulf governments’ energy diversification agendas and sustainability strategies.

Winning the MEED Renewables Company of the Year award for the second year in a row is a testimony of recognition of ACWA Power’s remarkable performance across the region. In the past couple of years, we have shown enormous progress and demonstrated reliable and responsible development and operation of renewable energy projects that played a key factor in facilitating the energy transition in the UAE, KSA, Morocco, and various other countries in the MENA region. We’re extremely proud to have secured this title as it is definitely an incentive to further expand our sustainable projects portfolio.

Conferring the award, the MEED Awards jury said: “ACWA Power has become a flagship for the region. Its commitment to excellence in the development of renewable energy in the region is breathtaking, showing that utilities-scale renewable energy can be an effective source of energy as well as a viable commercial investment. Its long list of achievements includes at least two world records and an impressive track record for safety and project delivery.”

ACWA Power is leading a number of landmark renewable projects in the region including Noor Energy 1 IPP, the 950 MW fourth phase of the Mohammed Bin Rashid Al Maktoum Solar Park, which is the largest single-site concentrated solar power plant in the world. The project will deliver electricity at a levelised tariff of US$7.3 cents per kilowatt-hour, a cost level that competes with fossil fuel generated electricity without subsidy for reliable and dispatchable solar energy through the night. The plant builds on ACWA Power’s successful work on Shuaa Energy 1 IPP, the second phase of the park, which has installed more than 2.3 million solar panels and has been operational since March 2017.

The Saudi-based company has also commenced construction of the 300MW Sakaka PV IPP, which is the first ever utility scale renewable energy project under the National Renewable Energy Program of Saudi Arabia. The plant, which is scheduled for completion in 2019, will supply more than 75,000 households with green power while offsetting over 430,000 tonnes of carbon dioxide per year and is a pioneering project aligned with the Saudi Vision 2030.