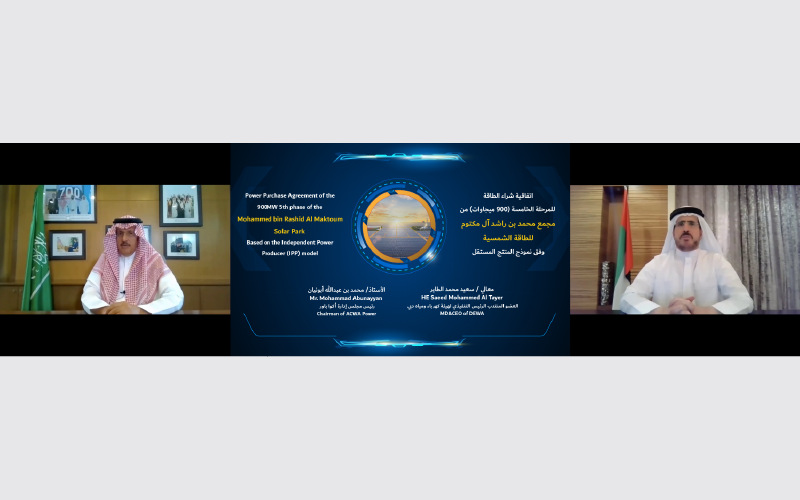 The progress of this project even as the world is severely impacted by the COVID 19 Pandemic is a testament to DEWA’s unwavering commitment to meeting the energy demands of Dubai with increasing share of renewable energy and reconfirms the confidence of the financial markets in the ability of DEWA and ACWA Power to successfully complete the project and reliably dispatch green electricity for the 25year duration of the contract.

In line with its strategy to support Dubai in its forward-thinking ambitions of becoming a low-carbon sustainable economy, the Mohammed bin Rashid Solar Park will be the largest single-site solar park in the world based on the Independent Power Producer (IPP) model when completed with a planned production capacity of 5,000 MW, with investments valued at USD 13.6 billion. When completed, the solar park will save over 6.5 million tonnes of carbon emissions annually.

The 900 MW 5th phase with an investment of USD 570 Million, will bring the production capacity of the Mohammed bin Rashid Al Maktoum Solar Park to 2,863 MW. This fifth phase alone is expected to power 270,000 homes and offset carbon emissions amounting to 1.18 million Tons per year in Dubai. The project will use the latest bifacial photovoltaic solar panels, which captures sunlight on both sides of the panel and produces energy with an advanced solar tracking system to increase generation efficiency.

The PPA was signed by HE Saeed Mohammed Al Tayer, MD & CEO of DEWA, and Mohammad Abdullah Abunayyan, Chairman of ACWA Power during a virtual signing ceremony.

HE Saeed Mohammed Al Tayer, MD & CEO of DEWA, extended his wishes during the Holy Month of Ramadan.

To achieve the vision and directives of the wise leadership of His Highness Sheikh Khalifa bin Zayed Al Nahyan, President of the UAE; His Highness Sheikh Mohammed bin Rashid Al Maktoum, Vice President and Prime Minister of the UAE and Ruler of Dubai; and His Highness Sheikh Mohamed bin Zayed Al Nahyan, Crown Prince of Abu Dhabi and Deputy Supreme Commander of the UAE Armed Forces, to  invest in clean and renewable energy project, we sign the Power Purchase Agreement (PPA), using conference-calling, with the consortium led by ACWA Power and Gulf Investment Corporation. This is to implement the 5th phase of the Mohammed bin Rashid Al Maktoum Solar Park. This pioneering national landmark is the largest single-site solar park in the world

“The UAE has proved that it has always been proactive and ready for all changes and conditions. The recent developments in the oil industry have proved the importance of the UAE’s track to bid farewell to the last barrel of oil and diversify the energy mix. At DEWA, we are guided by the vision and directives of His Highness Sheikh Mohammed bin Rashid Al Maktoum to make Dubai a global hub for clean energy and green economy. We are building major renewable and clean energy projects. The current operational capacity at the solar park is 1,013MW from photovoltaic solar panels. We have 1,850MW under construction from photovoltaic and Concentrated Solar Power (CSP), with future phases to reach 5,000MW by 2030. This supports our efforts to achieve the Dubai Clean Energy Strategy 2050, to provide 75% of Dubai’s total power output from clean energy by 2050,” added Al Tayer.

The signing of today’s agreement is a testament of the robust strategic partnership we have established with Dubai Electricity and Water Authority, which we are immensely proud of, marking the solar park as the most ambitious and largest project of its kind worldwide that aims to reducing carbon footprint in Dubai and transforming Dubai into a global model in the clean energy and sustainable green economy

Abunayyan highlighted the success of the fifth phase of Mohammed bin Rashid Al Maktoum Solar Park in achieving the lowest solar tariff globally and stressed ACWA Power’s keenness to commence the implementation of the project in accordance with the highest technical and operations standards. “The delivery of the project reinforces the durability and competitiveness of Dubai’s economic landscape under the wise leadership of His Highness Sheikh Mohammed bin Rashid Al Maktoum, Vice President and Prime Minister of the UAE and Ruler of Dubai; which continues its steady and pioneering plans despite the current circumstances, and reconfirms the confidence and attractiveness of the investment environment that Dubai spearheads internationally”.

“We are delighted to have been a reliable and trusted partner for DEWA’s ambitious goals. The fifth phase will witness a prosperous collaboration with Gulf Investment Corporation (GIC) and Shanghai Electric which will undoubtedly mark a milestone in the renewable energy sector – not on a regional level only – but on an international scale” Abunayyan added.

Dubai has successfully attracted regional and international private sector investment into the renewable energy. DEWA continue to increase the efficiency of the sector by using up to date clean technology and good utility practice at a very economical price. It will also promote economic and social development by bringing additional power capacity on stream in a timely fashion. GIC is a leading investor in power and water projects and intends to continue to play a major role in utilities projects in the Gulf

This solar park will be a key pillar in fulfilling Dubai Clean Energy Strategy 2050 to increase the share of clean energy in Dubai’s total power output to 75% by 2050.

DEWA announced the tender for the project in February 2019, upon which ACWA Power submitted the lowest bid in November 2019 at USD 1.6953 cents/kwh.

DEWA will retain a 60% stake in this latest solar project and be the sole off-taker of power under a 25-year PPA. The 5th phase of the solar park is expected to be commissioned in phases starting Q3 2021.