In the presence of HRH Minister of Energy and Uzbekistan’s Deputy Prime Minister: ACWA Power expands its presence in Central Asia with largest single-site wind farm in the region 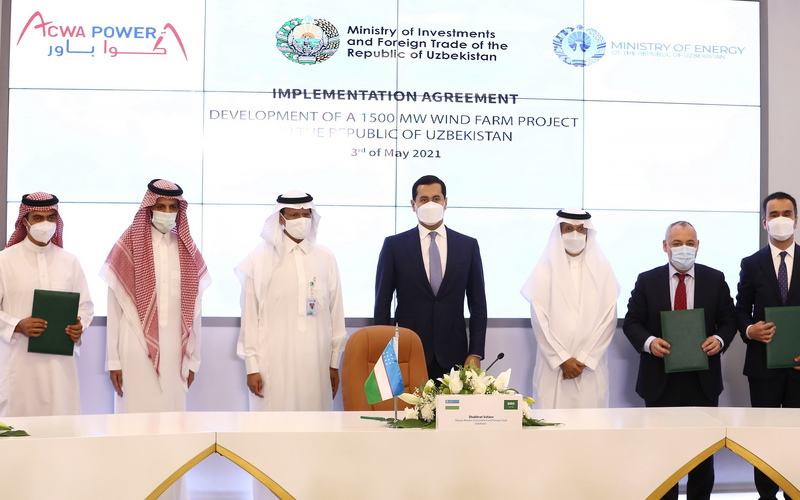 Riyadh, Saudi Arabia, 4 May 2021: In the presence of His Royal Highness Prince Abdulaziz bin Salman, Saudi Minister of Energy, and His Excellency Sardor Umurzakov, Uzbekistan’s Deputy Prime Minister and Minister of Investments & Foreign Trade, ACWA Power, a leading Saudi developer, investor and operator of power generation and desalinated water plants in 13 countries, signed an implementation agreement with the Ministry of Investments & Foreign Trade and the Ministry of Energy of Uzbekistan for the development, construction and operation of a 1500 MW wind power project in Karakalpakstan, Uzbekistan.

Once operational, the project will become the largest wind farm in the Central Asian region, and one of the largest in the world.

The implementation, development, construction, and operation of the largest wind farm in the Central Asian region by a Saudi company reflects the Kingdom’s leadership in the field of energy and its capability to develop the human and technical potential for Saudi companies, especially in the renewables sphere.

The project seeks to bolster the Uzbekistan government’s efforts to diversify the country’s energy mix and increase its renewable energy capacity in line with recent strategic reforms. The announcement follows the signing of Power Purchase Agreements (PPA) and Investment Agreements for two wind power projects in Bukhara and Navoi, concluded earlier this year with an aggregate power generation capacity of 1000 MW. ACWA Power also has a 1500 MW high efficiency gas fired power project under construction in Sirdarya, Uzbekistan.

We value our partnership with ACWA Power and welcome this expansion, which will be the largest facility of its kind in the Central Asian region once commissioned. This project will contribute to the implementation of our national renewable energy target of bringing the total renewable power generation capacity to 25% by 2030

As an energy producer, we in Uzbekistan are learning much from our Middle Eastern, especially Saudi, partners as we navigate the transition to a low-carbon economy. ACWA Power's project will be a major contributor to our plan to generate 25% of our electricity from renewable energy sources by 2030

We are delighted to finalize the implementation agreement for the 1500 MW Karakalpakstan wind farm with Uzbekistan’s Ministry of Investments & Foreign Trade, and Ministry of Energy here in Saudi Arabia; expanding on our international cooperation and continued partnership aimed at accelerating Uzbekistan’s energy transition. This project is yet another landmark accomplishment for the country, and reinforces ACWA Power’s commitment to working with high growth markets such as Uzbekistan to deliver on their ambitious renewable energy targets and sustainability goals

The project is expected to cater to the power needs of approximately 4 million households and offset approximately 2.5 million tons of carbon dioxide per year, contributing directly to the government’s aims to generate 30 percent of Uzbekistan’s power capacity from renewable sources by 2030, to meet growing yearly electricity demand, efficiently and sustainably.

In the presence of HRH Minister of Energy and Uzbekistan’s Deputy Prime Minister: ACWA Power expands its presence in Central Asia with largest single-site wind farm in the region
Newsroom