The urgency for water desalination

Around the world, an average of 80 - 100 gallons of water are consumed daily per capita with this number predicted to rise significantly in the coming years with the UN indicating global population to grow a further 13.2% by 2030, to reach a total of 8.6 billion.

Water desalination has long been utilised as a key solution to bridge the gap between water demand and supply. The process of desalination involves a process to separate salt from sea water to produce drinking water. This process is currently providing 90 million m3 of water a day and one of the biggest consumers is here in the Middle East, which accounts for more than 40% of the world’s water desalination capacity, with Saudi Arabia and the UAE ranking among top producers. [1[i]]

Water desalination is an energy intensive process. Huge strides are being made in the production process to utilize renewable energy resources to serve as an optimum substitute to powering desalination plants.

Understanding the type of energy each technology requires is crucial in determining the apt renewable source and depends on a number of factors including [2]: 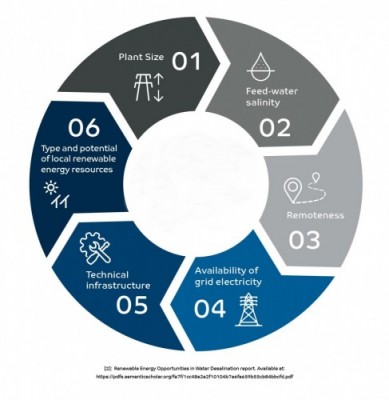 Below are the possible combinations of renewable energy resources suitable for each desalination process:

Around 70% of desalination in the GCC is currently done through thermal processes which require energy in the form of heat and electricity. Solar thermal or geothermal resources would serve as the ideal renewable energy resources to power those plants.

Alliances such as the Global Clean Water Desalination Alliance are investigating and promoting clean energy sources for desalination. The organisation has set several global targets till 2036 to provide a continually increasing percentage of clean energy to power desalination plants. The goal is to have 80% of renewable resources as the main provider of energy for desalination by 2036 [1]. 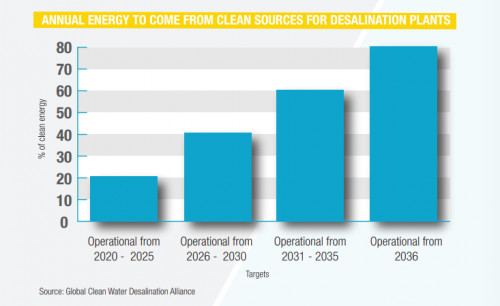 [3]: Economics of Renewable Energy for Water Desalination in Developing Countries. Available at: https://www.omicsonline.org/open-access/economics-of-renewable-energy-for-water-desalination-in-developing-countries-2162-6359-1000305.php?aid=66724

The urgency for water desalination
Newsroom