Under the patronage of the Saudi Minister of Energy, ACWA Power signs three agreements for the first foreign investment based independent wind power project in Azerbaijan 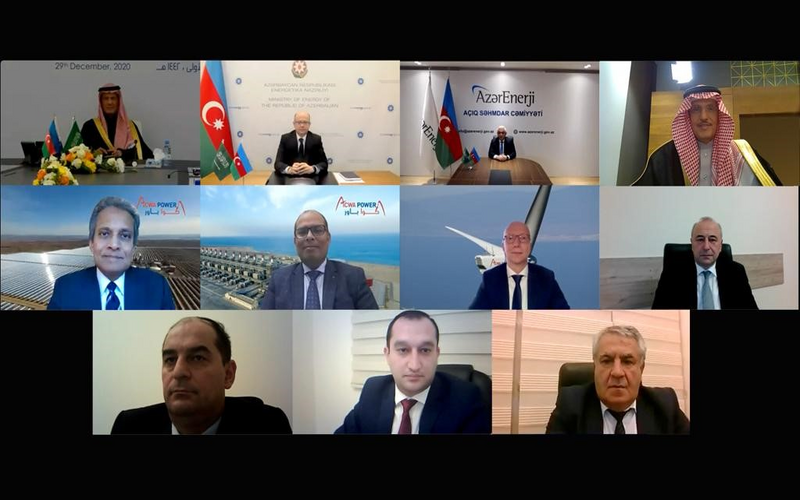 Riyadh, Saudi Arabia, 29 December 2020: Following the signing of the implementation agreement for the $300 million Independent Power Project in January 2020, ACWA Power today executed the official agreements for the 240 MW wind power project that will be located in the Absheron and Khizi regions. The virtual signing ceremony was attended by His Royal Highness Prince Abdulaziz Bin Salman Bin Abdulaziz Al Saud, Saudi Minister of Energy, His Excellency Parviz Shahbazov, Minister of Energy of the Republic of Azerbaijan, Mr. Balababa Rzayev, President of “Azerenerji” OJSC, and Mr. Mohammad Abunayyan, Chairman of ACWA Power.

Key agreements signed by ACWA Power, a leading Saudi developer, investor and operator of power generation and water desalination plants in high growth markets, included the signing of the Investment Agreement with the Government of the Republic of Azerbaijan, represented by the Ministry of Energy. ACWA Power also signed the Power Purchase Agreement and Transmission Connection Agreement with “Azerenerji” OJSC, the national electrical power company and off-taker for the project.

Though Azerbaijan has relied largely on natural gas to meet its energy needs, the focus is now on diversification and boosting of alternative energy resources. Renewables offer the most prominent solution to meeting Azerbaijan’s ambitious climate targets. The country has committed to reducing its greenhouse gas (GHG) emissions by 35% by 2030, under the Paris Agreement, which emphasizes the use of alternative and renewable energy sources to achieve this target. With its excellent wind resources, Azerbaijan’s move towards effectively harnessing wind as a sustainable energy source is being fast tracked by key public private partnerships.

As the first foreign investment based independent wind power project in Azerbaijan structured as a public-private partnership, the plant will contribute to reach Azerbaijan’s target of 30% of renewable energy capacity by 2030. Once complete, it will power 300,000 households. 400,000 tonnes of emissions will also be offset each year, supporting the country’s green ambitions.

The Kingdom of Saudi Arabia and Azerbaijan enjoy long-term diplomatic and economic relations, and cooperation between the two countries has been strengthened recently through their participation in OPEC+. Azerbaijan, along with other member countries played an important role in promoting stability in global oil markets. We appreciate Azerbaijan's efforts to fulfil its obligations under the Declaration of Cooperation, and the high level of compliance it has achieved

His Highness also expressed his confidence in the role that ACWA Power will play in promoting and expanding the cooperation between the Kingdom of Saudi Arabia and the Republic of Azerbaijan, and in supporting the efforts of the Azerbaijani government to meet its national needs of electric energy feasibly, economically and in adherence to international standards.

The signing of Agreements and implementation of the Project is an indication of the confidence in the business climate in Azerbaijan and will mark a next stage of economic cooperation between our countries. I am confident that after “ACWA Power” other companies from Saudi Arabia will follow suit and will invest in Azerbaijan. Concerning the importance of this project for Azerbaijan, I would like to stress that in addition to being first ever foreign investment based IPP, the wind power station annually will help to generate 1 billion KWh electricity, saving up to 220 million cubic meters of gas, cutting down on 400,000 tons of emissions annually, create new jobs and new production and service areas

His Excellency Parviz Shahbazov, Minister of Energy of the Republic of Azerbaijan
„

The signing of three key agreements today is a significant milestone and a strong step towards unlocking the renewable energy potential of the Republic of Azerbaijan. ACWA Power is honoured to partner with the Ministry of Energy, in Azerbaijan and the national electric power company “Azerenerji” OJSC to develop the first foreign investment based independent wind power plant

“ACWA Power continues to leverage its global expertise and capabilities to deliver large scale renewable projects that bring sustainable, socio-economic benefits to communities and markets where we operate. I express my sincere thanks to H.R.H Prince Abdulaziz Bin Salman Al Saud, Saudi Minister of Energy for his guidance and presence and patronage of this signing ceremony with the Azerbaijani Ministry of Energy,” Abunayyan added.

According to the contracts to be signed, connecting the 240 MW power plant to be built by the company to the grid and purchasing the power to be generated by the plant will be performed by “Azerenerji” OJSC. The implementation of this project will stimulate the development of our national economy, play an important role in ensuring the energy sustainability in our country, allow for saving the gas, which is our natural resource, and have a positive impact on the environment

ACWA Power remains focused on extending its leadership in high-growth markets through operational excellence and technological expertise, delivering power and desalinated water reliably and responsibly to communities across the globe.

Under the patronage of the Saudi Minister of Energy, ACWA Power signs three agreements for the first foreign investment based independent wind power project in Azerbaijan
Newsroom